Di Iaphet Elli ottobre 05, 2016
Authentic, soulful and rhythmically: Soneros de Verdad take their audience on a journey through the musical diversity of Cuba. 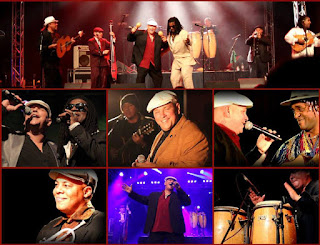 They call themselves the second generation of the Buena Vista Social Club – and they do that for good reason. Legendary Pio Leyva (Buena Vista Social Club) was one of the founding members of the now seven-piece band fronted by Luis Frank Arias. Luis Frank is todeay one of the great names and singers if it comes to real and powerfull Son Cubano. Together with his fellow musicians, he has dedicated himself to the mission of taking Son Cubano beyond the borders of his country and out into the world, to keep Cuba’s musical heritage alive. He has enjoyed fabulous success both in Europe and in the US. Thanks to his authentic manner this fantastic singer captivates his audience and takes them on a musical trip around Cuba – with all its different facets.

Musically – Soneros De Verdad – the “singer of the truth” go their own ways: On the one hand they remain faithful to the Son Cubano and play classics such as Chan Chan, on the other hand they also give many original compositions for the best. Releasing each year a new CD and music videos. The songs and also band is very powefull as in this brilliant way never been heard befor!
Together they enchant the audience with their energetic stage presence and dexterity.
Luis Frank Arias (Vocals)
Born in Las Tunas / Cuba
For a long time, he could be heard and seen in stage performances around the world alongside the “great” Compay Segundo (Buena Vista Social Club). His was the leading voice of the Afro Cuban All Stars and of Juan de Marcos González (bandleader and founder of the Buena Vista Social Club). He reached the pinnacle of his career in 2004 when he appeared in Wim Wenders’ movie “Musica Cubana” and the accompanying soundtrack. Soneros de Verdad, the ensemble led by Luis Frank and founded by Luis Frank and Pio Leyva (Buena Vista Social Club) gave a sparkling performance on the albums “A Buena Vista: Barrio De La Habana” and “El Run Run De Los Soneros” – with contemporary arrangements of beloved classics. With them he won the 2003 German Jazz Prize and has sold more than 500,000 albums.
EPK: http://www.kramer-artists.de/soneros-de-verdad-2/