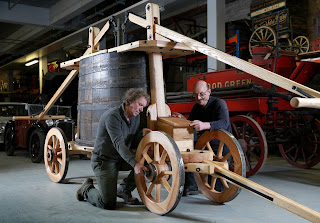 Originally built in London in the late 1670s by John Keeling, the only surviving part when the museum acquired the fire engine in 1928 was the central barrel and pump. The restoration was modelled on a 19th-century photograph of the engine (pictured left) which showed it still intact with its undercarriage, wheels, tow bar and pumping arms.
The museum worked with a team of long-established coachbuilders, Croford Coachbuilders in Kent, to reconstruct the fire engine as authentically as possible using traditional techniques and materials. The wheels, for example, were made out of elm for the hub, oak for the spokes and ash for the felloes, and sealed with an iron tyre.
Over a period of three months, the various parts were carefully crafted and assembled to fit exactly to the millimetre around the original barrel pump, but also made to easily stand out from the central piece. This restoration was made possible by the generous support of the Radcliffe Trust, the Worshipful Company of Coopers, the Worshipful Company of Grocers, and the Worshipful Company of Joiners and Ceilers Charitable Trust.
Curator for the Fire! Fire! exhibition, Meriel Jeater, said: “This fantastic reconstruction has revealed some incredible insight into how our fire engine would have worked. We now know that, with fixed wheels and a weight of over 500kg even without water, it would have been extremely difficult to manoeuvre around London’s narrow, cobbled streets. Also, the relatively crude pump mechanism was only able to squirt out about six pints of water over a rather short distance, so it would have been perilously close to the flames to have had any chance of putting them out. It was really hard for our visitors to imagine this object as a working fire engine when it was just a barrel and pump, so we’re really excited to unveil it in all its glory when we open our exhibition next month.”
Visitors to the Museum of London’s Fire! Fire! exhibition will be able to find the fire engine in the section which examines how fire-fighting techniques developed after the Great Fire. To see a video of the fire engine restoration, please follow this link to our YouTube channel.
Fire! Fire! runs from 23 July 2016 to 17 April 2017 and will focus on life on the eve of the fire, the dramatic events that took place as the blaze burned through a quarter of the city in 1666, and how London recovered from the devastation. Tickets priced from £8 for adults and £4 for children online, family tickets are available.
Further information: www.museumoflondon.org.uk/fire-fire 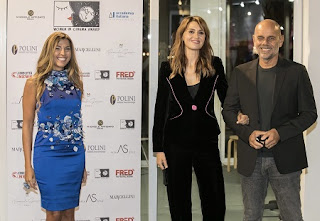